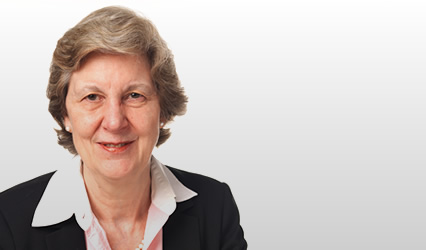 Janys M Scott KC is ranked as a star individual in Chambers Directory 2020, where she was described as the leading QC in Scotland in the area of family law. She regularly appears in the Inner House and Outer House of the Court of Session, and has made successful appeals to the Supreme Court. Her remit spans high-value financial provision in addition to complex child law cases. Janys is described as “the gold standard of advocacy”, set on a different level by her knowledge of the law.

The Legal 500 Directory reports that her knowledge of family law is encyclopaedic and also commends her work in the area of civil liberties, human rights and public and administrative law, where it is reported that she has a real depth of knowledge, as well as excellent preparation and delivery.

Janys was featured in The Times Newspaper as “Lawyer of the Week” on 2 August 2012, following victory in the Supreme Court for Jessamine Gow, who was claiming financial provision after the breakdown of a cohabiting relationship.

She is accredited as an arbitrator by the Family Law Arbitration Group Scotland (FLAGS) and a member of the Faculty of Advocates Dispute Resolution Service.

As well as family law, Janys M Scott KC is a recognised expert in education law. She is the author of “Education Law in Scotland” the second edition of which was published in 2016.

Originally qualified and practicing as a solicitor in England, Janys saw the light and came to Scotland in 1986. She worked as a Scottish solicitor before entering the Scottish bar in 1992.  She has served as Convenor of the Scottish Child Law Centre (1992 – 1997), Stepfamily Scotland (1998 – 2002) and the Scottish Legal Group of the British Association for Adoption and Fostering (2004 – 2010).  She was part of the Scottish Executive’s Adoption Policy Review Group, which reported in 2005.  In 2005 Janys was appointed a part-time sheriff. She took silk in 2007.

Janys was Chair of the Advocates’ Family Law Association from 2013 to June 2018. She is currently the President of the Part-Time Sheriffs’ Association and UK delegate to Family and Succession Committee of CCBE. She also chairs the Board of Trustees of Adoption and Fostering Alliance Scotland and is a trustee of the Lawyers’ Christian Fellowship.  In 2017-2018 she served as an expert panel member for the Strategic Review of Legal Aid. Janys has been Director of Westwater Advocates and a Director of Faculty Services Limited since 2019.

Landmark cases as junior counsel include:

Cases as senior counsel include: