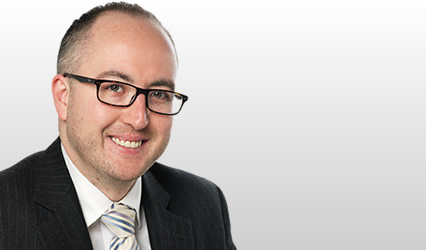 Since calling to the Bar Scott has quickly developed a busy and successful practice specialising within the field of Family and Child Law. He regularly appears in the Court of Session (Outer and Inner House) and in the Sheriff Court.

Scott has been instructed in cases dealing with all aspects of financial provision on divorce and the financial issues arising in respect of cohabitation claims, including reduction of divorce decrees and the setting aside of Minutes of Agreement.

Scott has a particular interest in cases with an international and cross border element, particularly international child relocation, child abduction, the enforcement of foreign orders including intra-UK orders and disputes over jurisdiction.

Scott has also appeared in numerous Child Law cases, including those containing public law elements. He has appeared in many permanence applications acting for both local authorities and birth parents. Scott also regularly advises and represents clients in relation to direct petitions for adoption. Holding a Diploma in Forensic Medical Science, Scott has particular interest in cases concerning medical evidence and psychological evidence relating to the interviewing and testimony of children. Scott has conducted many Grounds of Referral proofs involving allegations of abuse and non-accidental injury of children.

Scott also has experience in advising clients in relation to matters arising under the Human Fertilising and Embryology Act including contentious issues arising from surrogacy and assisted reproduction.

Scott’s other main area of practice is Professional Regulation and Discipline. He has been instructed on behalf of clients in relation to proceedings before professional disciplinary tribunals and the Inner House of the Court of Session in relation to registration issues, misconduct and professional competence.

Scott is a Committee Member of the Advocates Family Law Association. He is also a Director and Trustee of Family Mediation Lothian where he sits on the board. Having successfully completed the training and assessment Scott is a member of the Family Law Arbitration Group Scotland (FLAGs). As such he is able to accept instruction to act as arbitrator in relation to family or child law disputes. He has also been admitted as a member of the Faculty of Advocates Dispute Resolution Service (FDRS) in relation to family law arbitration.

Scott is regularly invited to speak at seminars and conferences where he has delivered CPD lectures. Recent topics include contempt of court in family cases, sequestration and financial provision, the Children and Young Person (Scotland) Act 2014 as well as providing updates in the fields of financial provision on divorce, cohabitation and child law generally. He also writes a regular Case Law Update for the Family Law Association Bulletin.

What the directories say:

‘An extremely talented junior who has quickly established a strong reputation since being called in 2012’ and ‘He is meticulous in his preparation of cases. His legal knowledge and advocacy skills are exceptional.’ ‘He is always willing to research areas of uncertainty and provide a swift and practical response.’ (Chamber and Partners 2016)

‘A junior who is rapidly establishing a reputation as a leading advocate for both children and financial cases. Sources commend his calm approach and effective courtroom advocacy. He offers especially deep knowledge of cases concerning international relocation, adoption and cohabitation law’; and ‘straightforward in his approach, smart and very thoughtful throughout’ (Chambers and Partners 2017)

‘Sensible, thorough and knowledgeable, with a personality appreciated by clients.’ ‘He is hugely clever. He has inside-out knowledge of all sorts of things, such as EU jurisdiction. He is always well prepared and has been a massive support to clients as he is caring and empathetic.’ (Chambers and Partners 2018)

‘Leading junior who predominantly handles complex cases involving teachers through all disciplinary stages. His expertise ranges from the Fitness to Teach Panel to the Outer and Inner House of the Court of Session.’ ‘He has an impressive ability to communicate successfully with clients in an informal yet effective way, and his advocacy skills are also excellent.’ ‘He has an enthusiasm and ability to deal with novel and difficult problems.’ (Chambers and Partners 2018)